The date is April 16, 1917. We open on a picturesque scene of a meadow on a calm, spring day. Two English soldiers sleeping under a tree in blissful contentment are suddenly awoken by their commanding officer to report in the main barracks. As they make their way through the trenches, all color washes out, the sky is overcast with dark clouds, and their breath lingers in the frigid air. This oppressive, foreboding ambience sets the mood for Sam Mendes’ 1917.

2019 didn’t mark the beginning or end of anything in cinema. Rather, it provided a return to well-tread grounds for discussion, primarily what cinema really means in the context of multimedia streaming platforms and corporate monopolization of the global market. 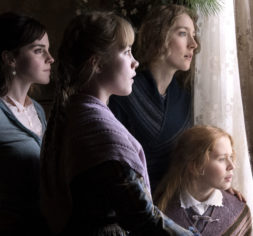 If there is a prevailing force which compels us to retell old stories, I would argue its one of comfort. The familiarity of a beloved tale provides us an opportunity to anticipate familiar beats and observe slight variations in the version a given raconteur presents to us. Louisa May Alcott may have kept this desire in mind when writing Little Women, and Greta Gerwig certainly embodies it in her adaptation. That isn’t to say that the previous cinematic iterations, only two of which were directed by women filmmakers, of the March sisters were lacking this factor. Yet Gerwig has endeavored to set herself apart from her predecessors through a dual subversion of and fidelity toward an American literary classic, a balance which proves to be graceful, if occasionally stilted, in its flourishes of modernity. 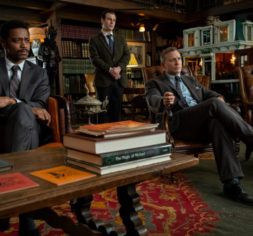 Murder Mysteries share several common denominators, primarily a private investigator, a victim, a list of suspects, their possible motives, and ultimately the killer revealed. The key to a good detective story lies in the author’s mixture of these ingredients. A Whodunit’s greatness can be determined by its intricate plotting or by its memorable characters, notably the lead detective, from Hercule Poirot to Miss Marple. In rare instances, the elements blend with a humorous touch, often to the point of parody, as in Murder by Death or Clue.

Rian Johnson made his directorial film debut fourteen years ago with Brick, a neo-noir set in high school whose characters spoke in the parlance of a Dashiel Hammett yarn. Now, he comes out with his latest feature, Knives Out, an entertaining romp that has fun with its first rate cast of characters without ever tipping into full-on caricature. It’s Johnson’s love letter to the genre, but his decision to place it in a contemporary setting subverts the material and makes it refreshing in a sociopolitical context.

Over a century after its inception, we still struggle providing an authoritative definition of “cinema”. One possible description I’d like to offer is the extraction of our subconscious desires unspooled before an audience at twenty-four frames a second. Few filmmakers have undertaken this specific approach with as much visual panache and audacity as Pedro Almodóvar, the Spanish aesthete whose newest film Pain and Glory (Dolor y Gloria) is informed both by his prior filmography as well as the ideological, cultural and sexual touchstones of his own life. Yet the modern maestro of melodrama has produced a mellow, melancholy movie that eschews his signature Sirkian bursts of emotion to introspectively lift back the curtain on the stage of his cinematic universe.

I am a student of cinema studies at the University of Minnesota. I have striven to cultivate and foster an appreciation for the cinematic arts through my critical writings on both classic and contemporary films. I have always held a strong conviction in the power of film to generate a conversation amongst viewers from cultures all over the world, and in that regard I have attempted to contribute to this dialogue through my critical output. Above all, it is my passion that drives me to contribute to this conversation.