"I had lots of troubles, so I write jolly tales." Louisa May Alcott

If there is a prevailing force which compels us to retell old stories, I would argue its one of comfort. The familiarity of a beloved tale provides us an opportunity to anticipate familiar beats and observe slight variations in the version a given raconteur presents to us. Louisa May Alcott may have kept this desire in mind when writing Little Women, and Greta Gerwig certainly embodies it in her adaptation. That isn’t to say that the previous cinematic iterations, only two of which were directed by women filmmakers, of the March sisters were lacking this factor. Yet Gerwig has endeavored to set herself apart from her predecessors through a dual subversion of and fidelity toward an American literary classic, a balance which proves to be graceful, if occasionally stilted, in its flourishes of modernity.

The most overt deviation is a structural one; indeed, anyone with a passing familiarity of the novel will be surprised to find the film’s opening scene that of Jo March (Saoirse Ronan) entering a meeting with the New York publisher Dashwood (Tracy Letts, positively oozing weary condescension). This Little Women leaps between its two halves, carving its famously bifurcated structure into vignettes which follow the youths and adulthood of the March sisters in roughly chronological order. The impact of this creative liberty is one which lends a heretofore absent portent of unease to the famous encounters and introductions in the novel, most notably the heartbreak of Thomas “Laurie” Laurence (Timothée Chalamet) over Jo’s rejection of his romantic overtures or saintly sister Beth’s (Eliza Scanlen) grave illness contracted from years past.

Rather than a showcase for ostentatious revisionism, this re-sorting of the narrative reinforces some of the novel’s melancholic undercurrent. The sequences in Hartford, Connecticut, awash in warm hues, contrast noticeably with the cooler shades of the latter-day passages. This color palette can sometimes be overwrought in its attempt to differentiate the two timelines, rendering some of the actors in jarring skin tones (Meryl Streep’s ornery aunt often has the unflattering impression of a wax figure doused either in talcum powder or pink Vaseline). Yet the film’s editing, aided by Gerwig’s precise eye for connective shots, often justifies this creative gambit. One cut between the past and the present bridged by a character sitting at the same window illustrates twinning moments of loss with quiet, sensitive devastation.

Loss courses throughout the story, whether it be of childhood or of female autonomy in a rigid patriarchy, compounded by death and disappointment, or rather the “disappointment of being a girl”, as Jo puts it. Lady Bird, Gerwig’s enormously successful directorial debut, conveyed her young heroine’s melancholic transition from her cultural and geographical roots against the minutia of a specific era in American history. Where Lady Bird implemented the 2003 Invasion of Iraq in the background chatter of television broadcasts, Little Women casts the specter of the Civil War over its characters. Even while fighting for the North, the March matriarch Marmee (Laura Dern) ruefully admits that she’s “ashamed of my country”. Yet Gerwig doesn’t reinforce divisions, both then and now, in America. If there is an America she eulogizes, it’s one shared by old Mr. Laurence (Chris Cooper) hunched over his staircase in tears as Beth plays the piano he gifts her in the other room, reminded of the deceased granddaughter he mourns.

This elegiac paean for the protean American family, one fractured by factors both tactile and ineffable, is leavened by the novel’s gentle humor. Several instances of mild slapstick, including two instances of characters catching fire, threaten to tilt Gerwig’s film into broad comedy in the first twenty minutes. Thankfully, her unwavering love for the text carries through in her cast’s spry deliveries of Alcott’s dialogue. Ronan’s Jo and Florence Pugh’s Amy fare best, trading barbs and quips which heighten Gerwig’s pursuit of modern sensibilities whilst carefully avoiding the pitfalls of anachronism. Pugh effectively captures the two sides of a woman who was a spoiled brat in youth only to eventually become perspicacious of her own talents and aspirations which are stymied by the “economic prospect” of marriage.

Not everyone in the cast successfully personifies their character. Chalamet exudes the ebullience of Laurie as a youth yet the heartbreak of his adult years remains fixed in the rote key of mopey insouciance. Far less magnetic is Emma Watson’s Meg, whose passive nature serves to elucidate some of the aforementioned themes of patriarchal social institutions. Yet her arc, which sees her navigate high society and marriage, doesn’t transcend the requisite contrast it provides for the fates of the other sisters. Even Dern’s delivery of the line about being “angry nearly every day of my life” contains more emotional pathos and unspoken complexity than the entirety of Watson’s performance. 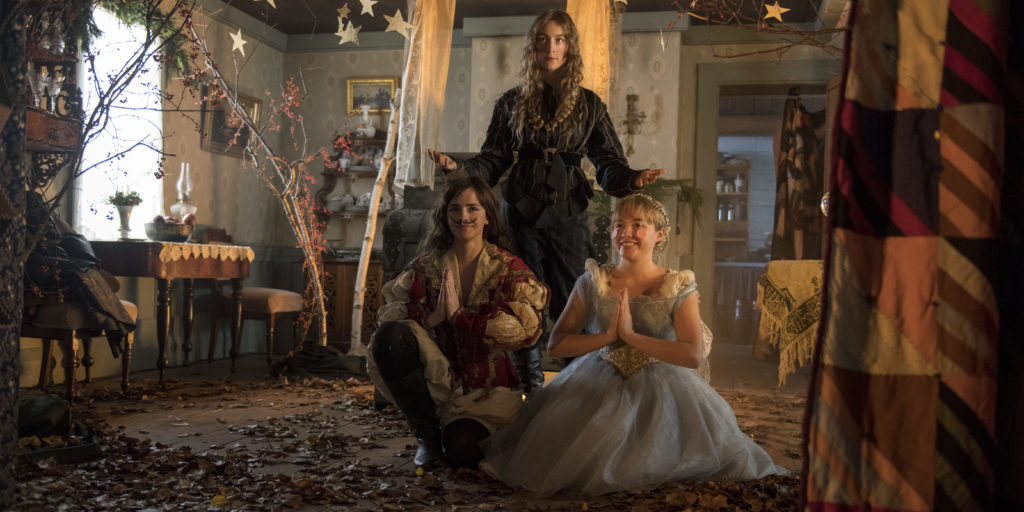 Nevertheless, Gerwig’s Little Women yields enough subtextual subversion to justify its existence, particularly in the denouement. While she ostensibly retains Alcott’s ending, the aesthetic emphasis on crosscutting between past and present subtly transitions to one which oscillates between fiction and reality. Yet even this reading of the conclusion seems reductive in describing the cumulative impact of the film. Rather than glibly denouncing the novel’s contradictions, Gerwig probes those very elements to generate something of an oxymoron; an affectionate deconstruction of a classic tale. This duality provides a thesis not only germane to Alcott’s own text but also as a poignantly metatextual rumination on imagination and creativity as bastions of respite and inspiration for the artist as a young woman.

Four sisters come of age in America in the aftermath of the Civil War.