The ‘Hong Kong, Reimagined‘ programme, part of the Chinese Cinema Season, is showcasing several films by student filmmakers from the Hong Kong Baptist University’s Academy of Film. This programme is thoughtfully curated by UK-China Film Collab, co-organiser of the UK online film festival, in order to inspire constructive debate about the region. In a series of interviews, Nick talks with the filmmakers about their work and inspiration. This conversation was held with Anna Yiu Wan Yin, the director of Funeral. 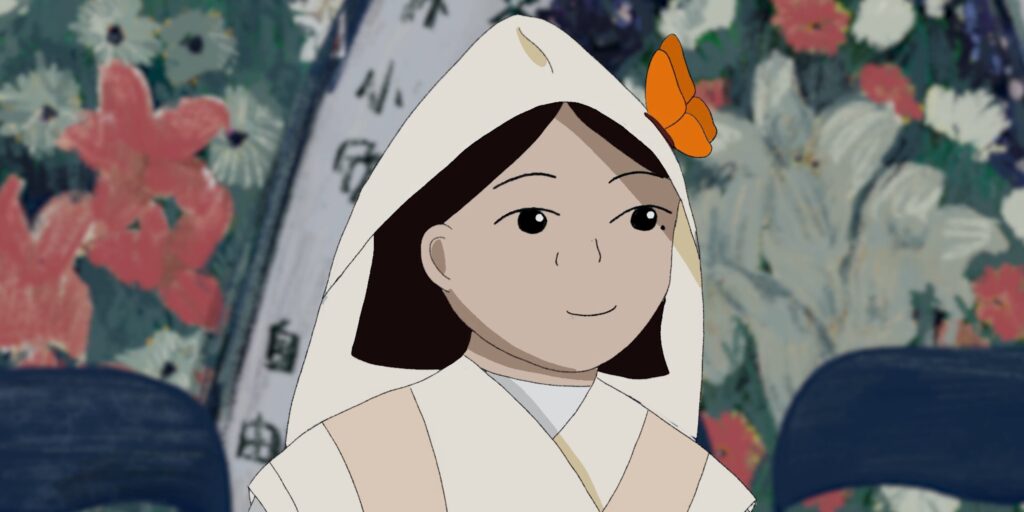 Nick Kouhi: Funeral resembles a memory, and that subjective sensation of remembering is portrayed effectively in the film’s flashback structure. Was Funeral based in any early childhood memories or experience you had first attending a funeral?

Anna Yiu: Yes, Funeral is based on my childhood memories. When I was very young, about 6-7 years old, it was my first time participating in a Chinese funeral, which was my great-grandfather’s funeral. I asked my parents a question during his funeral: “Where does Great-Grandpa go?” My mother said that he was just sleeping. She did not explain to me directly what death is. I was conscious of death when I was growing up. We can see the difference between Chinese and Western families and cultures. In the west, parents will tell their children someone passed away. But in Chinese families, the parents avoid discussing what death is and they do not allow “death” to appear in our childhood. When I grew up, I realized that death is a common thing, and can even help us become stronger.

Additionally, I was inspired by watching Coco. Mexicans will celebrate their dead ancestors happily during Día de Los Muertos (Day of the Dead), just like the Ching Ming festival. They think that after death is the real beginning of life. However, in China, death is the biggest taboo. But ancestor worship is an  important part of Chinese social life and a continued relationship between the living and dead. Therefore, I want to explore the relationship of death within Chinese culture in my animation. 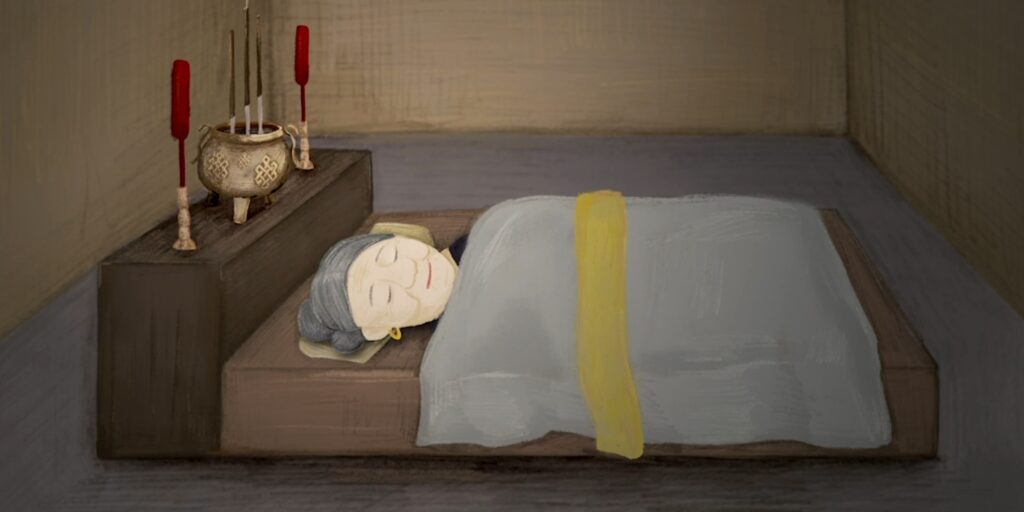 NK: The film has a unique relationship with death in that, despite the morbid subject matter, it initially has this almost whimsical tone. How did you strive to establish a light-hearted touch while treating your themes with appropriate seriousness?

AY: The animation is divided into two parts which are the mother’s funeral and grandmother’s funeral. I applied different colours in the funerals to make a contrast. At the grandmother’s funeral, it was the first time the young girl attends a Chinese funeral ceremony. She felt excited and surprised, because she did not realize what a funeral was. The funeral home settings are based on the real funeral. There are some Chinese funeral paper offerings and paper dolls as decorations, which are colourful and creepy. The girl represents the young me. In the child’s mind, they do not think funerals are a serious thing if they do not realize what death is. Thus, I used a brighter colour tone to establish a light-hearted touch. In the girl’s imaginary part, a cartoon style and plane effect are used to emphasize the girl’s naïve thoughts. 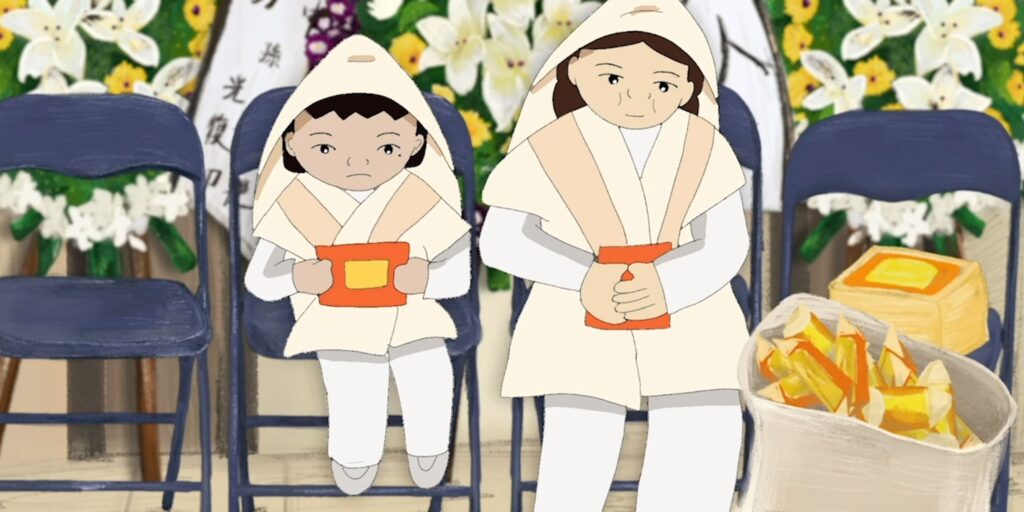 However, when the girl grows up, her mother dies. At her mother’s funeral, she has a different feeling compared to her grandma’s funeral. Thus, darker colours and blue tones are used to reflect the inner feelings of the heroine.

NK: Cultures from all over the world differ in how they hold funerals. Can you talk a little about some of the customs and traditions of Chinese or Hong Kong funerals and why you chose these customs as the subject of your film?

AY: There is a big cultural difference between Chinese funerals and Western funerals. Hong Kong is a Chinese society and death is the biggest taboo in Chinese society. However, I believe that ancestor worship and funeral rituals form an important part of Chinese social life, partly out of the belief that here is a continued relationship between the living and dead. Therefore, I want to emphasize the message about the cycle of life, relationship, and connection between family and generation and the concept of Chinese death. My target audience is children, their parents and adults because death education is a necessary lesson for everyone. 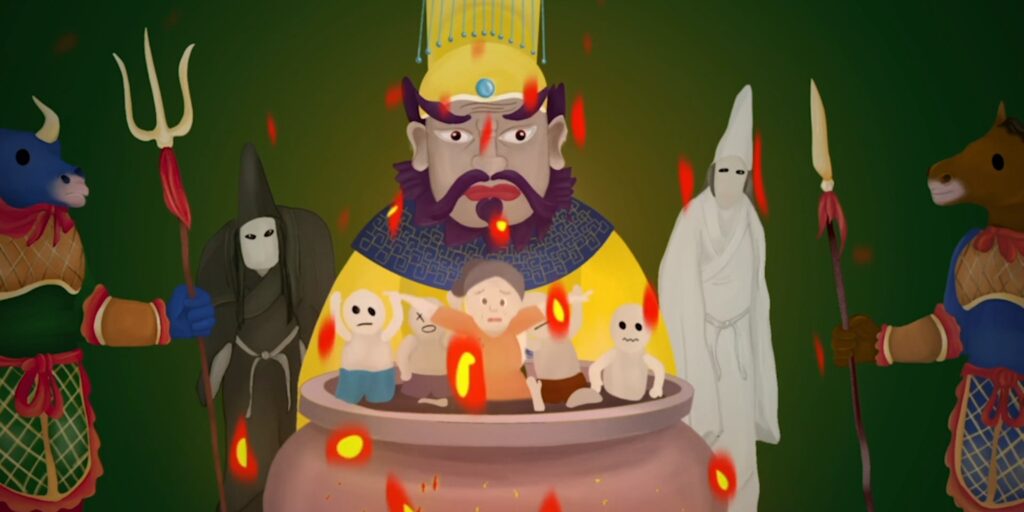 At grandma’s funeral, the mother taught the girl how to fold the joss paper which signifies a continued tradition. Some joss paper and paper dolls are burned to ensure that the spirit of the deceased has lots of good things, like money, in the afterlife.

During the Hong Kong funeral, the Cantonese ritual called “Breaking Out From Hell” (破地獄) is always carried out. Monks will walk briskly and rhythmically with some props surrounding the fire. Chinese people believe that the soul needs to face the Ten Courts of Hell after death. Taoist or Buddhist prayers are sometimes carried out by monks to help the soul of the deceased find peace and escape the fate of becoming a “restless ghost”. I think these customs are interesting and meaningful.

NK: Can you speak a little to the incorporation of some of the mythical figures featured in the film, particularly Gun Yam? What are their significance in East Asian culture and why did you highlight these specific figures in the film?

AY: Many Chinese mythical figures appear in the imagination of the girl. They represent the image of afterlife and religion. The girl’s cousin told her that  grandmother was caught by monsters and is frightened when seeing Yanluo Wang, who is the King of Hell in Chinese.  He is a deity in Chinese religion and Taoism. His image is horrible and evil. People will be punished if he or she commits a crime during their lifetime. The girl thought it was unbelievable.

Then, Mother consoles her and explains that her grandma already went to heaven to find Gun Yam. In Chinese culture, people believe that when they die, if they are lucky enough, they may go to heaven and represent that they are free from the world. Gun Yam is the Buddhist bodhisattva associated with compassion. Some Buddhists believe that when one of their adherents departs from this world, they are placed by Gun Yam in the heart of a lotus, and then sent to the western Pure Land. Guanyin is often referred to as the “most widely beloved Buddhist Divinity” with miraculous powers to assist all those who pray to her. Additionally, if people say someone has gone to find Yanluo Wang  or Gun Yam, that means he or she is dead. That statement is a Chinese Death Euphemism.

Chinese Cinema Season (Feb 12 – May 12 ) is the largest online showcase of Chinese-language film in the UK and Europe, presented by Trinity CineAsia, Filming East Festival and the UK-China Film Collab. Funeral is now available to stream for UK viewers here. For more information on other filmmakers in the season, check out our interviews with Natalie Tsang Yuk Lui and Ian Lui Yee Pan.