"Fame: it's not your brain, it's just the flame that burns your change to keep you insane." David Bowie

In the difference between art and commerce, can happiness exist? The query is nearly a truism at this point, but what gives it continued relevance is a post-modernist esthetic that, when accomplished successfully, challenges the viewer to reflect upon not merely the issues being presented to them but the very fragility of the form itself without resorting to cheap cynicism or lazy stabs at insight. Case in point, Bojack Horseman, the animated Netflix series which has overcome preconceived expectations (and an admittedly rocky start) to become one of the best shows to grapple with the notion of happiness and to what its absence can be attributed on an extrinsic and intrinsic level. That it’s filled to the brim with sneaky paronomasia, cutting satire, and anthropomorphic animals with names like Princess Carolyn and Mr. Peanut-butter is purely incidental.

The series chronicles the life of a former television star (think Bob Saget from Full House crossed with Mr. Ed’s chronically depressed nephew) struggling mightily to reinvigorate his stagnant career. After publishing a successful memoir and landing his dream role as the star of a biopic based on his childhood hero Secretariat, Bojack finds himself thrust into the torrential current of an Oscar campaign for Best Actor. Never mind that his performance in the film is largely comprised of a digital composite due to his ill-fated escape to New Mexico near the end of the last season, and it’s a testament to the show’s writing that our protagonist’s horrible actions in the Land of Enchantment still bear some stark ramifications on his psyche. Indeed, Bojack’s insecurities are only exacerbated by the glut of attention afforded him by the success of his first major venture into becoming a bona fide “movie star”. But rather than solely attributing Bojack’s self-destructive tendencies to the toxic environment of a capitalist schema totally bereft of ethics, creator Raphael Bob-Waksberg and his talented team of writers acknowledge the inherent vice of their eponymous equine. As a trusted friend later tells him, “you need to be better,” in spite of everything purportedly outside of his control. Who says that line and the catalyst for that confrontation remains best unspoiled, though in the interim the show finds a myriad of misadventures both wildly outrageous and sharply incisive. Three seasons in, and Bob-Waksberg’s crew have lost none of their barbed social commentary, perhaps best exemplified in the appropriately, if tastelessly, titled Brapp Brapp, Pew Pew, which is named for a song pop star sensation Sextina Aquafina (a dolphin, just to clarify) writes after Bojack’s friend, Diane, mistakenly posts that the celebrity is having an abortion on the starlet’s twitter page. If the episode is uncomfortable to watch because of the subject matter, it is even moreso due to the complicated nature of the Cult of Celebrity and how that feeds into a national narrative for women everywhere. It’s a nuanced portrait of a multi-faceted issue, made no less so by the bevy of jokes made at the expense of blustering male newscasters pontificating patriarchal puff pieces and aquatic-based wordplay alike. But if the series has exhibited time and again a sophistication in its verbose dissection of western culture, season three serves as a healthy reminder that Bojack Horseman takes full advantage of the medium of animation, particularly in the justly praised episode which finds Bojack traveling underwater to attend the premiere of the Secretariat film. With barely a few scant minutes of dialogue, Bojack’s traversal through an oceanic metropolis and beyond is akin to the closest to a Chuck Jones-directed iteration of Anomalisa we could ever hope to visualize. The less that’s said about this particular episode, the better, only for the plethora of visual wonders the show’s team concoct amidst the pervasive undercurrent of melancholy concerning Bojack’s role as a potential father, and whether the reality of that role divorced from his television persona will bring him what he is sorely lacking. The episode, as is the case for the entire season, doesn’t formulate a concrete answer to that question. What we receive instead is a gorgeous, nearly dreamlike fantasia imbued with quiet poignancy and a cruelly funny punchline. 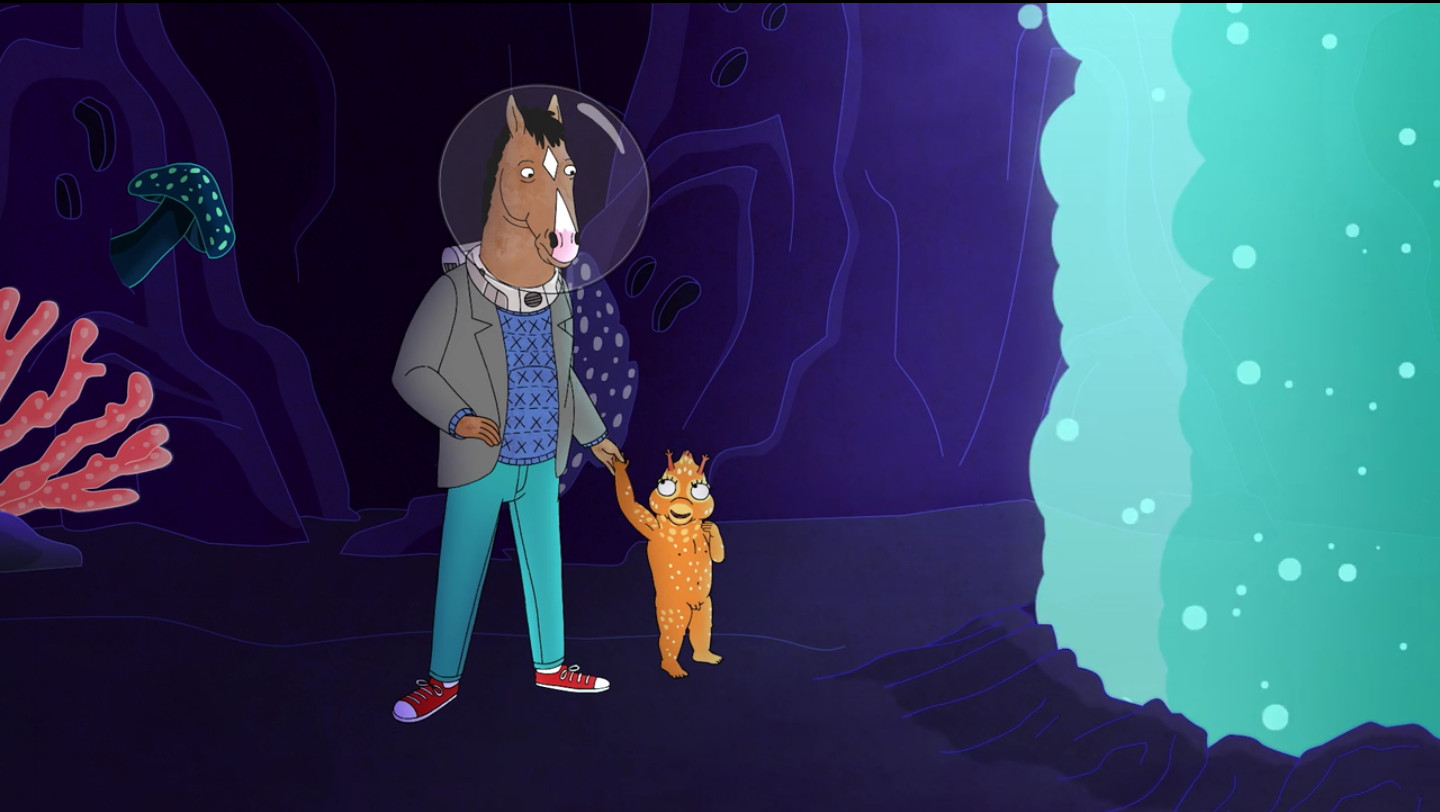 If this daring penchant for experimentation, including a multi-episode sojourn to 2007 and a bottle episode set in a restaurant, causes the season as a whole to lose some of the sharp focus of its precedent year, its this groundswell of innovation that makes Bojack Horseman one of the most idiosyncratic shows on television. Three seasons in, the series still has the bold confidence to dare its audience to look at an animated horse and the people around him to witness a compendium of desperation, loneliness, and self-destruction with nakedly brutal honesty. In a golden age for television, and still in a time when animation is ghettoized as primarily children’s entertainment in the United States, Bojack Horseman pushes the boundaries of both mediums. For such an often bleak series, there’s something strangely rejuvenating about that.

Meet the most beloved sitcom horse of the '90s - 20 years later. BoJack Horseman was the star of the hit TV show "Horsin' Around," but today he's washed up, living in Hollywood, complaining about everything, and wearing colorful sweaters.