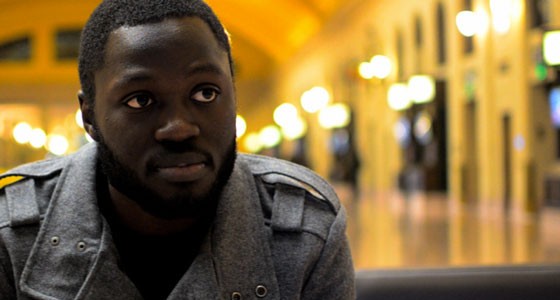 "My humanitarian aspirations are for my own aggrandizement"

International activism coincides with a local ilk of the same strain in Salone, the second film released by the Minneapolis-based production company Cineapolis. The forty-five minute portrait of a few days in the life of an aide worker (Demi Adediran) after his return to the Twin Cities following his tenure under St. Mary’s in Sierra Leone may be brief, yet it is in no short supply of considerations towards political involvement on an individual level. If anything, its surfeit of ideas yield more potential than its director, Aswar Rahman, is able to sufficiently fulfill in such a condensed running time.

Arjun, the young protagonist of Rahman’s film, wanders the cityscape with a restless verve against the cultural backdrop of Barack Obama’s re-election. His interactions with those closest to him, including his sister named Tess (Hannah Aslesen), her husband (Adam Glatzl), and an old friend (Emeline O’Hara), who may or may not have been romantically involved with Arjun in the past, are all colored by his political awakening. Indeed, the highlighted quote, featured in an exchange between our protagonist and a professor, serves not only as an acknowledgment on Arjun’s part of his own limitations and agenda in his efforts against the legacy of imperialist ideologies but also as a pragmatic realization of the thin demarcation between participant and proselytizer. In other words, the personal truly is the political.

This inner conflict manifests itself also in the supporting characters of Ali, Arjun’s companion, and his brother-in-law. The former considers applying for a company which Arjun argues profits from human degradation and exploitation, whereas the latter has found himself gainfully employed by another company which employs such practices to a degree where Arjun’s affinal kin comes to question his place in perpetuating what is referred to as a “continuation of legacy”. For Rahman, whose father is an honorary citizen of Sierra Leone, this project doubtlessly serves as a continuation of his own cultural history, but even more importantly as a statement on the precarious position we in the western world occupy as a means of assimilating those outside our sphere of influence. It is an uneasy query that, the film argues, haunts all of us whether we’re conscious of it or not.

The most intriguing manifestation of Western iconography within the multicultural mosaic in Salone is the recurring motif of the 1950 adaptation of Cyrano de Bergerac starring José Ferrer. The classic, watched by Arjun and Tess, serves as a parallel to Arjun’s own quest to assert his identity, albeit in a global commonwealth rather than the French aristocracy. If that famed figure in Rostand’s original play ultimately lost his panache, then Arjun conversely grapples with a dispirited disillusionment that threatens to engulf him. This struggle is reflected in Adediran’s performance, whose often times monotonous inflection serves as a boon rather than a detriment to the character. Whatever inexperience Adediran may have as an actor, Rahman attempts to utilize as many of his lead’s strengths as possible to accentuate his protagonist’s existential ennui.

If Salone has one inescapable flaw, it is its lack of momentum. It contains an intriguing outline, powerful conviction, and a cast intelligently engaged with the material that is given to them. However, its episodic, nearly elliptical vignettes prevent the undertaking from transcending a series of ideas into a fully coalesced whole. One or two characters, including a friend who discusses foreign policy with Arjun over chess, unfortunately do not strengthen the narrative or thematic thrust of the tale and beggar questioning about their place within this American variant of a Kammerspielfilm. Nevertheless, if Rahman’s greatest fault lies in his irrepressible ambition, then I can’t truly levy any grievous faults I may have with his film. Not when he so clearly is trying to elucidate the connective tissue we share that urges us to reject isolationism, now more than ever, in these tumultuous times.

A young aid worker (Demi Adediran) returns from an extended mission in the slums of West Africa to find life intolerable at home.